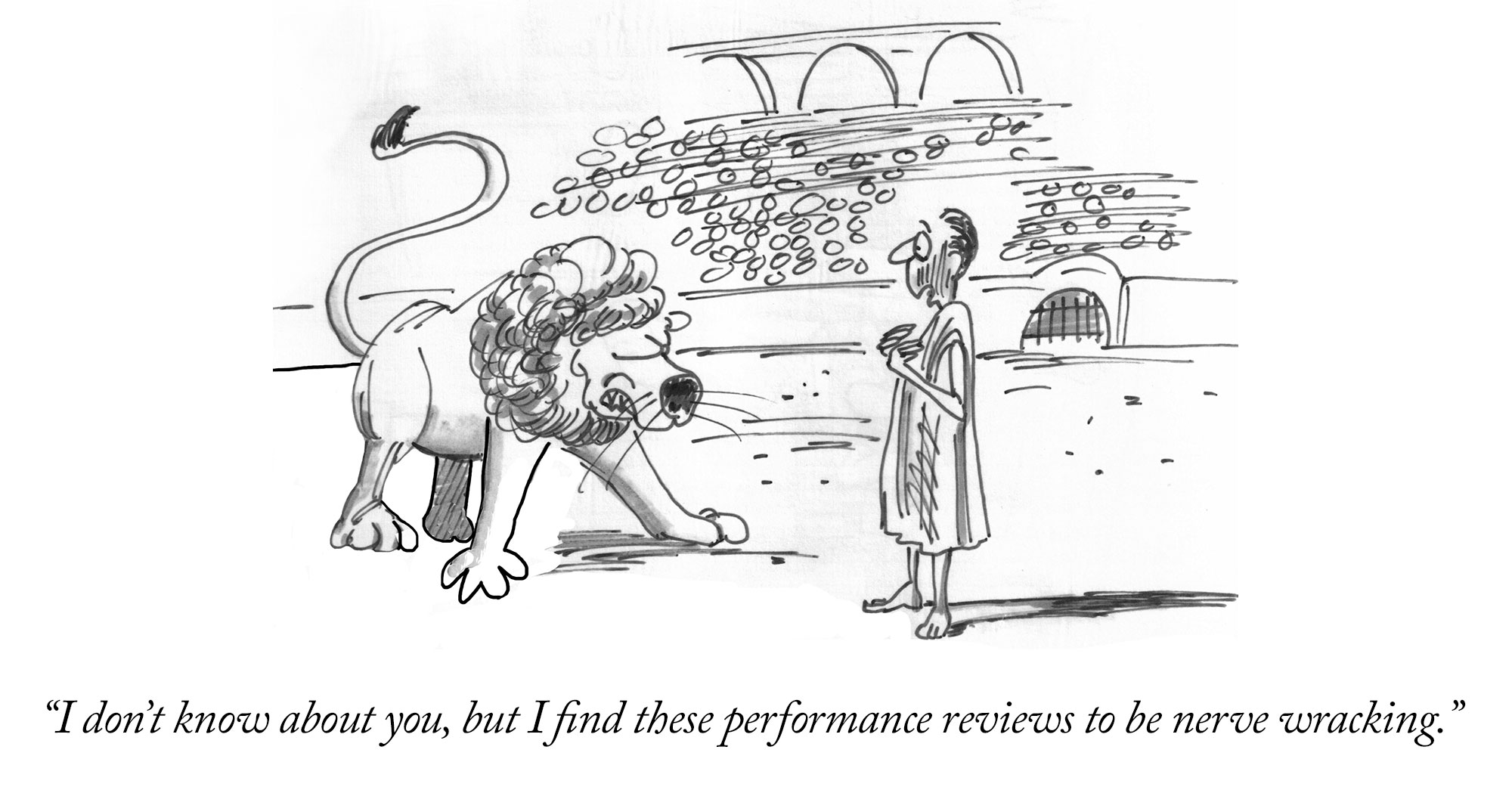 This classic Frontier post, 3 Reasons to Nix Your Annual Performance Reviews (and What to Do Instead) reminds me of a time several years ago when the startup I worked for shared a bathroom with an insurance company across the hall. Once a year, without fail, one of the managers who worked there would roll her eyes as she washed her hands and say, "You're so lucky you guys don't do annual performance reviews. They're the worst."

As many of us are painfully aware, annual performance reviews have the potential upsides of promotions and bonuses, but they can also breed fear and distrust between employees and leaders.

We’ll go ahead and say it: annual performance reviews are a waste of time for many companies. They’re an archaic solution for today’s modern workplace that don’t lend themselves to true employee engagement. All too often, employees—and managers—don’t get anything out of the process.

We aren’t the only ones with this anti-performance review stance: Four percent of HR managers think their company’s current system actually works, and 83 percent feel an overhaul is needed. What we’ve discovered in working with companies of all sizes and in all industries is that employees want more. They want to be engaged, but the right systems aren’t in place for them to actively improve on a continuous basis.

Here, Ryann, the CEO of The Frontier Project who has established many of our own cultural and team processes, and Kelsey, our HR manager, break down three reasons you should drop your annual reviews—and three solutions to embrace instead if you’re ready to create a culture of engagement within your team.

They breed fear and distrust between employees and leaders.

‍If review season only comes once a year, it creates a tense, nervous environment—and not just for the employee being evaluated. Because most managers only have to give constructive feedback to their teams once a year, they aren’t very practiced at this skill, says Ryann. So they’re either really bad at it, or they’re afraid to do it. That means employees don’t know what to expect, managers are stressed, and everyone loses.

And when people are put on the spot to have a constructive conversation, says Kelsey, it’s rarely productive. “It’s like being called down to the principal’s office in school,” she says. You’ll automatically go to a place of fear and assume you’re going to get in trouble, so the conversation starts off on the wrong foot from the get go.

Ryann’s solution to that problem? Practice, practice, practice the art of giving feedback. “Encouraging managers to regularly practice the skills of effective communication is the only way employees are going to get great constructive feedback that will help them with their performance.” (We’ve got workshops that can help you with this; check them out here.)

They aren’t proactive or timely.

‍The fact is, employees want and need feedback more often than once a year if they’re going to do a good job. “There’s no possible way you can calibrate your performance if you don’t have more readily available feedback,” says Ryann.

And what if something happens at the beginning of February, Kelsey asks, but your company has reviews scheduled for the month of October? Are you just going to file that issue away and not talk about it? If so, that small seed can (and likely will) grow into a much bigger problem as time passes. Annual performance reviews are anything but proactive.

They don’t measure the right things.

‍Another issue with once-a-year reviews? They’re often based on a set of stale metrics that don’t really measure an employee’s worth. Say there’s a checklist the manager has to follow in the review, and one of the points includes evaluating whether or not an employee can meet deadlines. Maybe the employee hits a deadline every single time, Kelsey says, but is what they’re turning in actually good? Did they produce great work?

Managers are also measured by metrics; usually those metrics involve the performance of their team, and that may or may not be tied to bonuses. So managers might be more inclined to give high marks across the board to make themselves look better. When boiled down to a high-pressure window of time, performance reviews are a really skewed system.

“Someone in sales, for instance, could get nothing but high marks because they hit their goals, but it doesn’t mean they’re a good employee or that they automatically add value to the company’s culture,” says Kelsey. “You have to consider a lot of other qualities, and that means constantly assessing employee performance.”

So what can you do instead? Here’s the approach we take with our own team.

Have regular check-ins between managers and employees to encourage continuous manager involvement and rapid employee improvement.

Instead of framing this issue through the lens of evaluating performance, why not frame it around the idea of creating two-way relationships between your managers and their teams? We opt for quarterly check-ins, which aligns with the pace of our company.

“As a small but quickly growing company, we needed a system that encourages rapid feedback because we’re constantly adding new people and creating new positions,” says Ryann. “So we always have to make sure that those people know what they’re doing well and what they can improve on. And it allows us to help them or move them around in the organization so we can make sure they’re doing what they’re really good at.”

There’s another benefit to consistent feedback meetings, Ryann says. “If you create a culture of being able to give feedback quickly, you’re going to get feedback, too, and that’s really helpful because you need that just as much to calibrate your performance as a leader.”

Bottom line? You’ve got to put in the leg work to have a more responsive relationship your team, and regular check-ins set the tone for that open and honest relationship.

Have neutral, third-party check-ins to catch other important feedback that will help grow your culture.

‍Once you’ve got a system in place to foster two-way conversations between managers and employees, consider the other feedback you might want to capture from your team. This is your chance to think about ways to grow your culture and help your employees get their work done better or faster.

That’s why we’ve got two additional check-ins: twice-a-year operations check-ins between employees and our CFO, Ned, and quarterly culture check-ins with Kelsey. If managers are focused on peoples’ performance and team dynamics, Ryann says, then these additional check-ins are meant to be a more all-encompassing opportunity to hear about how everything is working from a big-picture perspective.

The ops check-in gives our team a forum to talk about the tools they might need to get their job done more efficiently that they might not have yet. Ned has an operational mindset and can easily problem-solve those pain points on the back-end to make those requests happen. The culture check-in, on the other hand, is a safe space for employees to talk to a neutral third-party about their experience as a Frontier employee. It’s open-ended, which gives people a chance to air concerns and share feedback.

“We care very deeply about our culture and want to make sure we preserve what’s great about it, even though the business is moving really fast and growing quickly,” Ryann says. “So it’s important that we keep our finger on the pulse of those things so we don’t head in a direction we don’t want to move in.”

Embrace transparency by removing the barrier between employees and your company’s top leaders.

‍If you’ve rolled out regular meetings that ultimately funnel feedback to the top, you can take it a step further by introducing regular opportunities for anyone on your team to meet with your company’s top leadership.

For our team, this looks like twice-a-year casual conversations between each employee and Ryann. “We started these because we saw the importance of our leadership team getting to know each person that works here,” Ryann says. “We don’t usually talk about work. Instead, they’ve been great opportunities for us to build a personal connection with everyone across our team to make our team dynamic stronger. And it’s been a fantastic way for us to communicate to our employees that we are here to listen to them whenever they need us, that they don’t need to be intimidated or scared of us just because we run the company.”